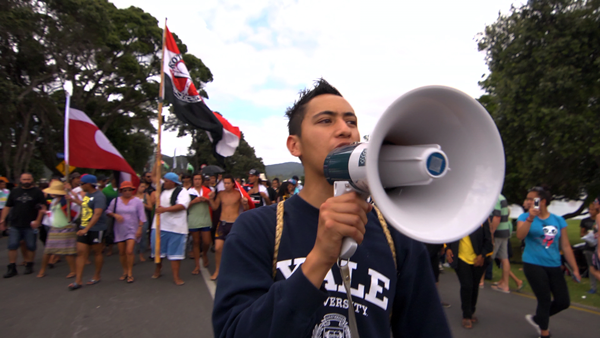 After screening throughout the world on the film festival circuit award-winning documentary Maori Boy Genius is in cinemas from May 2. Frances Morton spoke to director Pietra Brettkelly.

Auckland filmmaker Pietra Brettkelly makes documentaries with an international scope. She interviewed Colonel Gaddafi, followed New York contemporary art star Vanessa Beecroft to Sudan to adopt twins and, in her current project, is looking at a female-only garden in Kabul, a haven for Afghan women in the country that ranks as the worst place in the world to be a woman. So when she was approached to make a film about Ngaa Rauuira Pumanawawhiti, Brettkelly was reticent. “I thought, ‘Oh god, a New Zealand boy, teenager, is he going to be able to carry a documentary?’”

Ngaa Rauuira is a bit unusual. Raised in Otaki and Hastings, he began tertiary study at 13. At 16, he was accepted to study at Yale University. When Brettkelly met him she was struck by his charisma. He is well-read, articulate and deeply interested in politics. All this dovetailed with a film idea Brettkelly had long been considering. “I once heard that in our 16th year, even though we might not be aware of it, we’re starting to realise our place in the society and start to form our political views.”

Pumanawawhiti personified that idea. “Even though I work in documentary, we do cast. You wait for the right person who’s going to explore that theme.” In Maori Boy Genius, Brettkelly trails Ngaa Rauuira from close-knit Maori whanau to the hallowed halls of Yale.

He doesn’t see himself as a genius and the title also sits uncomfortably with her. It’s a hangover from the film’s first life as a documentary for Maori Television. That TV hour focused on Ngaa Rauuira’s academic success and draped him in a cloak of expectation to become a leader of his people, perhaps the entire country.

The feature-length version takes a more lyrical approach, due to the influence of Danish editor Molly Marlene Stensgaard (Lars Von Trier’s favourite editor), whom Brettkelly met while developing the film at Amsterdam’s Binger Institute. “Molly said, ‘It’s about the strength of identity that comes from family.’”
Like her other works, Brettkelly sees this as an international film, which is why it is subtitled. The film has already proved its wide appeal with screenings at Berlin, Sydney and UK film festivals.