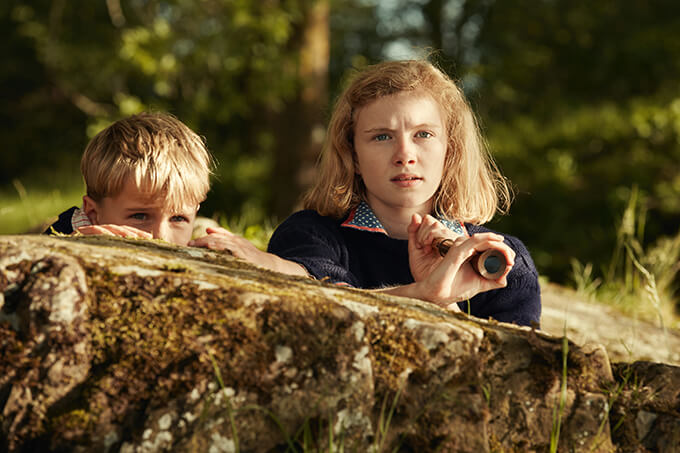 So okay then: my review of Swallows & Amazons is that it goes off in the wrong direction, but somehow arrives at a decent destination. The destination I wanted it to try for being possibly unreachable, this may be the best achievable outcome; the golden shimmer that lies on Arthur Ransome’s books in my memory is not an effect any camera is going to catch, and any attempt to catch it in other ways was liable to produce sentimental faux-nostalgic overkill. Four children get permission to go sailing in the English Lake District one 1920s summer. They meet a rival sailing crew: a mysterious man on a houseboat is rude to them. These are the bare bones of the first book, and you can see why writer Andrea Gibb and director Philippa Lowthorpe decided to inject a bit more drama into things. The man on the houseboat is now being hunted by foreign agents; chase sequences involving a train and a plane have been added to the sailing adventure. Guns are fired.

If you’d told me this before I saw the film I might have torn up my ticket. In the books, the crew of the Swallow inhabit a vast world full of potential for meaningful achievement — their lake is an ocean, the island they sail to is virgin territory, and the sailing competition with the crew of the Amazon is a test of skill and honour for everyone involved. This is not a story needing added drama, so much as it needs film makers able to capture the drama that’s there already. And yet I like nearly everything Lowthorpe and Gibb do here: the shape of the story is all wrong, but every little detail feels right. It’s partly the dialogue, which is sharp and sweet and clever, and partly the excellent casting — I want to say “especially the child casting”, because the children are all great, and the film needs them to be, but in fact the adults are just as good. Also, there’s a lot of respect for the books at the granular level. One example: one of the Swallow’s crew is called “Titty”, the nickname of a child Ransome once taught to sail. It isn’t a name you could use today; the 1963 BBC version changed it to “Kitty”. But the nickname originally came from a children’s story called “Titty Mouse and Tatty Mouse”. So in this film, the character becomes “Tatty”. These film-makers have a deep grounding in their material.

This is not the Ransome adaptation I wanted, but it’s too strong in its own right to object too vociferously.

So that’s my review, which means I am now permitted to give you the more relevant one. Emily the eight-year-old said the following, very emphatically: “I loved it”.

I saw Swallows & Amazons at the ASB Waterfront. Previously I’d been there for a couple of opera productions; the experience was mixed. I’ve now seen enough films there to have an opinion of it as a festival venue, and again, it’s mixed. If you’re tall, good luck finding a seat with decent knee room. The circle seats are too far from the screen for its size. My first film in the stalls downstairs had me in row H, which when I went to my seat was entirely plastered with “Reserved” signs; when I asked what this was about, I was told that if anyone sits in row H, the people in the row behind can’t read the subtitles. “But there are no subtitles for this one so you’re fine”. 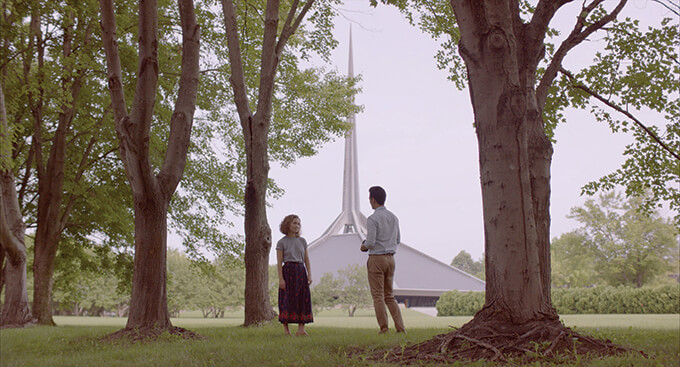 On the other hand, from downstairs the screen is a good size, and the space feels intimate. There’s enough distance from the front row to the screen that I found I could solve my knee room problems by slipping down to the front if no one had booked there, which mostly they hadn’t; in the future I’ll know to grab those seats when I make my own bookings. I already sit in the front row in several other theatres whenever I can, which means I’m familiar with the faces of the small handful of festival regulars who share the same preference. I bumped into one of them at the Swallows & Amazons screening. We had our usual “What have you seen that I should see?” conversation. “The kids’ animation programmes”, she said. “So good. Just so good. I went to the ones for adults, and they’re okay. Lower strike rate, frankly. The kids’ ones are gold. And the audiences are so young and they behave so well!” My advice to her was, “See Columbus“.

I have difficulty remembering now why I decided to see it myself. A young woman struggling with a complicated mother and an older man struggling with a distant father work out their feelings by… going to look at architecture together. Many conversations ensue. Did this strike me as too unlikely not to work?

It works. At the time I had the exchange above, it was my favourite film at this festival; since then I’ve seen Michael Haneke’s Happy End, but still. See Columbus. Two pinpoint-perfect performances, from Haley Lu Richardson and John Cho, are framed within elegant, gorgeous cinematography: every shot is composed just so. I can’t recall a film with a stronger sense of space. The characters are complex and interesting, and the tempo is brisk yet relaxed: nothing is made too obvious or said too quickly. It would be possible to summarise this as the story of two people arriving at necessary but very unoriginal epiphanies — it’s about things that can go wrong in parent/child relationships, and therefore deeply familiar to anyone who’s been a member of the human race for more than five minutes — but the intelligence and beauty of the film-making gives the material a lucid profundity. I can’t recommend this enough. 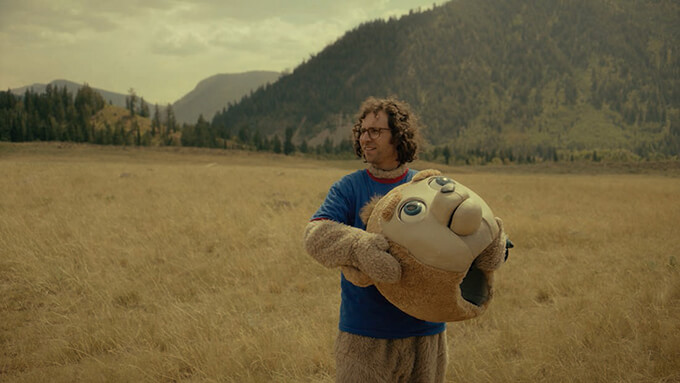 Other things worth seeing: Brigsby Bear is fun, and funny, and sweet, and a little less odd than I wanted it to be. A young man has grown up in a bunker on a poisoned, post-apocalyptic Earth, getting all his education from the only TV show still being made, the fantastical, ultra-low-production-value adventures of the eponymous Brigsby Bear. One day cop cars roll in from the supposedly devastated wastelands, and he discovers that he’s actually an abduction victim living in a cult in modern day America. He finds this strange, but what appals him deeply, on encountering the world that’s been kept secret from him, is the discovery that no new episodes of Brigsby Bear are being made. In fact no one else has ever heard of the show. He sets out to let people know what they’ve been missing.

So a little bit Unbreakable Kimmy Schmidt, and a little bit Captain Fantastic, and very… nice. Basically it’s a film about fandom and geek culture, which is to say it’s using the story of someone newly freed from extreme isolation to explore inherently insular forms of cultural enthusiasm. It’s a good idea, and in many ways it works, but there’s a sort of sitcom cosiness to the humour which weakens its bite. Still. Decent enough fun.

Neither cosy, nor fun, but definitely worth seeing: Lady Macbeth. This is based on the 19th century Russian novella Lady Macbeth of the Mtensk District, which takes its title from the Shakespeare character, so if you assume you know where the story’s likely to go, you’re not necessarily wrong, but the journey may still startle you. Florence Pugh is remarkable as a young bride brought to an isolated mansion in northern England, where her husband and father-in-law swiftly shatter any hopes she may have had for marital bliss. She is not someone to take this quietly.

The film itself is very quiet. No score, and only the northern weather to add to the sounds of the small household. The work of creating and escalating tension is entirely done by the cast and the camera. Tense, spare, vicious, effective. 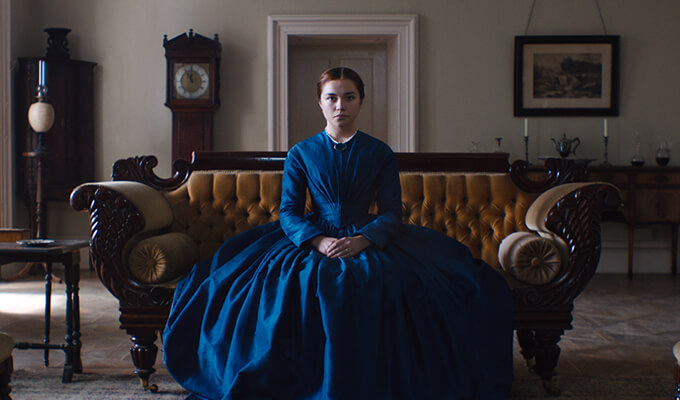 Film festival season is the only time of year I find a valid use for Twitter. If you want a fast spread of opinions on what’s good and what’s not, search “#nziff twitter”. Films I haven’t seen yet that seem to be getting strongly positive reactions: Bad Genius, Call Me By Your Name, The Lost City of Z, A Ghost Story, A Fantastic Woman, I Am Not A Witch. (Also a useful place to pick up on the less positive reactions. When three different people report walking out of the same film… it may just be dividing audiences. Or it may be uniting them).

I love longform drama, both the TV kind, and the unusually-long-film kind. They’re different beasts. I was planning to write something about the differences in form and style observable between Bangkok Nights (three hours) and Top of the Lake: China Girl (six hours; made for TV) — both of them being complex ensemble stories organised around a strong female lead, with an emphasis on the experience of sex workers, it seemed like a useful comparison to look at. But I found Bangkok Nights almost impossible to grasp — its many storylines weave in and out so quickly and with so many key events implied rather than stated, and there was only one extended period where I was fairly sure I knew what was going on most of the time. I walked out asking friends questions at the very basic comprehension level — “The guy in the Laos t-shirt who she tells she has HIV, who was that?” “Did he buy the gun because he was becoming a pimp, or was he actually going to kill someone?” “Was the ghost really a ghost?” The film is a rich brew, but I’m not the only person who came out baffled. And as for China Girl — no. Just no. I admire Jane Campion. But despite striking performances from Elisabeth Moss and Nicole Kidman, I found this embarrassingly weak. 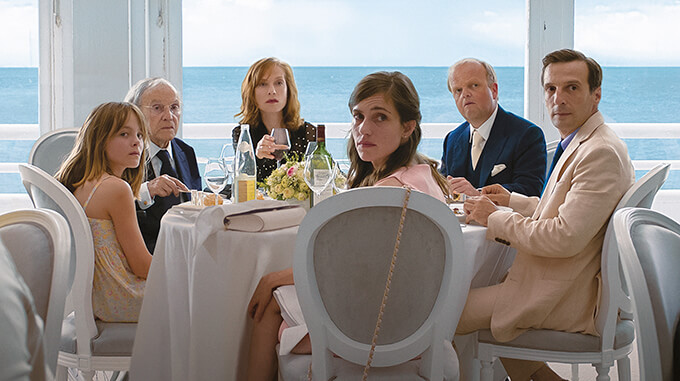 Happy End does not exactly break this streak. On the other hand, it’s rather funnier than I was expecting. This is not the reason you should run out and see it. Every frame is under absolute control; from start to finish, the film is the fully realised expression of a singular, disciplined vision. The vision happens to concern the slow internal collapse of a wealthy French family under the pressure of being ghastly one percenters, but the fact that this is comedy so merciless it only just registers as comedy is almost beside the point. Any film made this well would hold me spellbound. From the cellphone video that brings in the opening titles and right on through to the end, Haneke is constantly playing with form, and constantly playing with your expectations. He’s working with a fantastic cast, especially at the upper and lower age extremes: Fantine Harduin and Jean-Loius Trintignant play the young daughter and the ancient grandfather of the family, and their scenes together are indelible. I walked out feeling the I-have-just-experienced-great-art buzz that is, finally, under all the other reasons, the drug that keeps me coming back to this festival.