The Age of Genius: The Seventeeth Century & the Birth of the Modern Mind - review 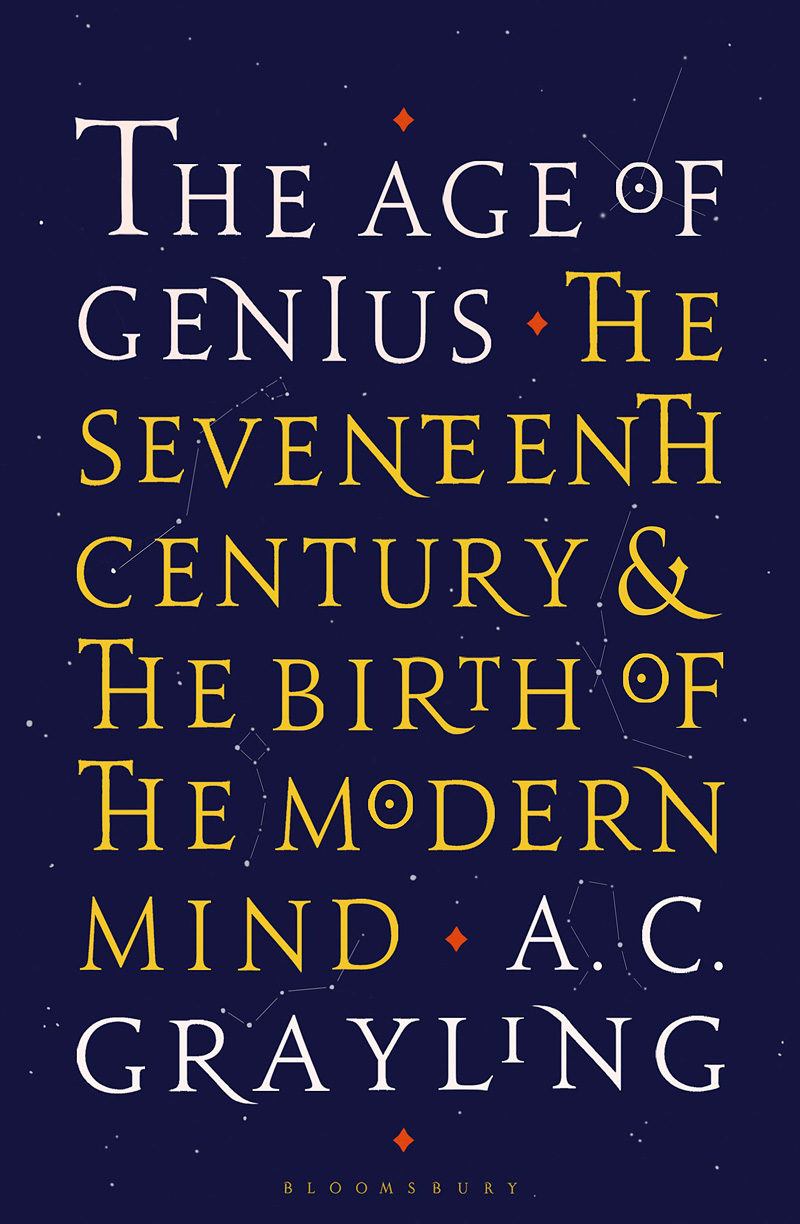 The Age of Genius: The Seventeenth Century & the Birth of the Modern Mind
A.C. Grayling
Bloomsbury, $29.95

We’ve been labellers ever since God commissioned Adam to name the beasts in the Garden of Eden. Nowadays everything gets a brand identity, including arbitrary constructs like decades and centuries. Take the 17th century, aka “The Age of Genius”, which according to philosopher A.C. Grayling, was the Gladwellian tipping point between the medieval worldview and the mindset of modernity, which gave rise to reason, science, the Enlightenment, industrialism and ultimately, us.

Grayling is a university don, a prolific author and commentator, public intellectual and implacable opponent of religion, and is on a mission to bring the rigours and consolations of philosophy into the public space, but without the aid of cartoons and other gimmicks. Not McPhilosophy, but rather a kind of gourmet burger, somewhat heavy on history and polemic, and as it turns out somewhat light on the “genius” it promises.

Take the first third of the book, in which Grayling escorts us through the 30 Years War that raged across Europe at the start of the century in question. It’s a series of “Where’s Wally?” panoramas — wall-sized canvases depicting battles, with well-padded generals astride pot-bellied steeds rampant in the foreground while behind them ignorant, ant-like armies clash, no doubt wishing they were abed in England, or anywhere else. It’s an extended homily on the absurdity of fighting over religion, and the folly of assigning divine rights to kings and princes (and queens and princesses, even – Ed). But the dates and names instantly fade into a blur, and there’s hardly a genius in sight, unless you’re into innovations in siege engines and battlement design.

Up next is an exposé of various wrong-headed ways of knowing: alchemy, Rosicrucian hermeticism, and astrology. All had been bedfellows with medieval Christianity, and all would in due course give way to science and reason, but since the Reformation the Church had been purging itself of excessive superstition and silliness, only to realise too late that its central teachings also relied upon supernatural beliefs. The cause célèbre, of course, was Galileo, forced to recant his mathematical proof that the sun is not a fiery chariot on a diurnal joyride across the empyrean.

Grayling is on a mission to bring the rigours and consolations of philosophy into the public space, but without the aid of cartoons and other gimmicks.

Grayling tells the story with verve, and some fascinating details, such as Isaac Newton’s life-long devotion to alchemy (!), and the role of the first postal service in networking European thinkers. But this is still not so much a story of genius as of the demise of a worldview, of the universe as a settled, hierarchical Chain of Being with a niche for us all. How and why it fell apart and made way for the Age of Enlightenment to follow is a fascinating story, but not exactly new territory.

Since the 18th century, we’ve been arguing about the 17th, asking what brought about this shift in human consciousness. The Enlightenment simply announced that it was “enlightened” and got on with the long task of developing powered flight, the atom bomb, credit-default swaps and the smartphone.

It took more than a century until the German Max Weber asked, plaintively, if something important was lost in the process of “disenchantment” that gifted us an ethic founded upon work and material advancement.

This century, the French historian Paul Hazard elegantly addressed the question: “How come everyone before the Enlightenment appeared to be so thick?” They weren’t, he says; they had genius too. It’s complicated and worth considering in detail, lest we mistake our own assumptions for eternal truths.

Grayling skips over three centuries of debate and describes a simple arc, from the darkness of faith and religion to the light of reason and scientific method. Only towards the end of the book do we encounter much true genius: Galileo, Francis Bacon, John Locke, René Descartes and Blaise Pascal (though to Grayling the genius of these last two was tainted by their inability to cut loose from Christianity).

This is a book that needs another hundred pages to be truly convincing (or maybe not so many battle scenes), especially as elements of the pre-modern mindset seem to have survived into post-modernity (think religious fundamentalism).

It’s a phenomenon Grayling the rationalist disdains when, one might argue, as a scientist staring down the microscope at humanity he would be better to look for a more nuanced theory.