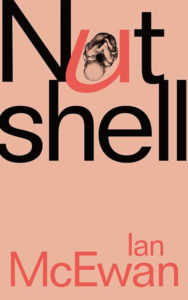 “Oh God, I could be bounded in a nutshell and count myself a king of infinite space — were it not that I have bad dreams.”

Stealing the best-known character in the Western canon and pressing him into service for yourself is the kind of literary gimmick more usually associated with thrusting undergraduates enamoured of their own ingenuity.

When the guilty party is as venerable as Ian McEwan it would be nice to admire his chutzpah rather than slate the self-indulgence that he has cheerfully admitted is likely to get him “a kicking”.

Like Lucy Barton, this is a short novel — fewer than 200 pages — but there isn’t any of the emotional grunt that Strout achieves, just a vapid intellectual exercise that has Hamlet soliloquising from his mother’s womb in 21st-century London where “Trudy” is carrying on with “Claude” — Hamlet’s father’s slimy brother reconfigured as a dastardly property developer, no less — behind the good cuckold’s back.

McEwan doesn’t shy away from ickier aspects of the situation: fetal Hamlet, “upside down in a woman” as he announces himself to the audience, is appalled that his uncle’s penis should be getting so close to him and terrified that he’s going to be ejaculated on.

Towards the end, things do get nicely claustrophobic: the entrapment of the child within his mother echoes the tangle she’s created for herself and her avaricious lover outside in the world, and placing the character of Hamlet inside her adds even more of an Oedipal frisson to his possessiveness towards her.

But for a fetus who knows only what he’s heard from BBC podcasts and overheard conversations, the narrator is oddly incurious about the world he’s about to inhabit. If frailty’s name is woman, on the strength of this, flimsy’s is McEwan.