My Name is Lucy Barton - review 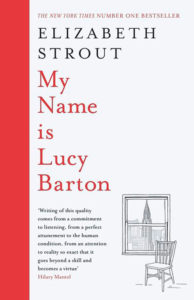 Elizabeth Strout says it took her 15 years “to get sentences to do what I wanted them to do”. The apparently artless simplicity of My Name is Lucy Barton belies supreme control; Lucy’s voice is unadorned, but her storytelling skills are revealed as the narrative unfolds.

From a hospital-bed reunion with her mother, the story flashes back to her poor, rigid upbringing in the American Midwest and the circumstances that led to her becoming a writer (“Books brought me things… And I thought: I will write and people will not feel so alone!”).

Writing about the effects of a hard childhood, the absence of five dollar words makes the emotional wallop all the more devastating: “There are times too — unexpected — when walking down a sunny sidewalk, or watching the top of a tree bend in the wind … I am suddenly filled with the knowledge of a darkness so deep that a sound might escape from my mouth, and I will step into the nearest clothing store and talk with a stranger about the shape of sweaters newly arrived.”

Having a narrator who is also a writer invites speculation: how autobiographical is the character of Lucy Barton? Certainly, the injunctions Lucy gets “to be ruthless” and not to protect anyone as she learns to write fiction feel like advice that Strout has taken to heart.

This is a novel about the difficulties and the imperfections of love: marital, platonic, but most of all, motherly and daughterly love. Lucy’s mother failed to protect her — from poverty, and from her father’s unpredictable behaviour while she was growing up — but the lack of judgment with which she is presented allows the reader to see her solo, cross-country journey to be with Lucy in hospital for the act of selfless bravery that it is. (“‘Was it scary getting a taxi, Mom?’ I saw the terror that must have visited her when she stepped off the plane.”)

The most important similarity between Strout and Lucy Barton is that they are both deeply compassionate writers. That’s not to say that Strout leaves anyone off the hook: the parental brutality recalled by Lucy is gut-wrenching, her memory of her younger brother, dragged through town by his father, tears streaming down his face, after being caught dressing up in his mother’s underwear, “a bra over his T-shirt and a string of fake pearls”, is almost unbearable, for her and for us.

But Lucy also recounts how her father held his son in his arms after his humiliation.

By giving us such a resolutely unsentimental, hugely generous view of humanity, Strout, like Lucy, is writing so that people feel less alone.

Literary fiction, even of this high calibre, is limited by the size of its audience, but the adaptation of her work for a broader medium (a TV version of Olive Kitteridge, her collection of short stories set in Maine, won an Emmy last year for best miniseries) has increased its reach, which can only be a good thing.

My Name is Lucy Barton — longlisted for the Man Booker Prize but left off the shortlist — is fiction that deepens our understanding of one another and increases our tolerance. For all its quietness, this is superb.