Living in Paradox: A history of urban design in New Zealand by Garth Falconer - review 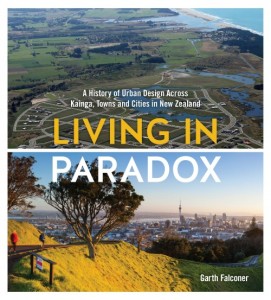 “Distance and newness”, maintains Garth Falconer, have freed New Zealanders from the burdens of “tradition and class hierarchy”. A fresh view: that should be good for urban design. In his ambitious, rambling tome Living in Paradox: a history of urban design across kainga, towns and cities in New Zealand, Falconer asserts innovative design here is selectively filtered, from missionary times onwards, through the screens of egalitarianism and moral conservatism. The result is an “urban anywhere” with little that’s distinctive or indigenous, “a discontinuous city with a lack of housing choice and affordability, a patchwork of unrelated low density and an impoverished public realm”.

Indeed. Settlers arrive with designs — “facsimiles of other places” — in their back pocket which are “hastily implemented in skeleton form”. New Zealand “came to deserve its Spartan, ugly and makeshift reputation”. Contrast such ordinariness with the perception of landscape — paradise, God’s own, “wilderness and verdant grazing lands” — that came to dominate cultural imagination and you have a paradox. How did New Zealand get itself into such a pickle?

Falconer, a landscape architect and urban designer, traces a wandering path through a well-trodden history. Despite their Edenic ideals, the colonists find the dense bush “ominous and threatening” and a “hindrance to economic exploitation”. It has to go. Meanwhile, around 1840, boosterism was in full cry, marketing the landscape with picturesque and Arcadian imagery to attract immigrants, so the land speculators could make their killing. Some things never change.

Falconer highlights bands of indefatigable surveyors between 1840 and 1850 “cutting the lines, dragging the chain” setting out the spatial basis for settlement. The early campers marking the land “immediately bonded with each other and the wilderness” and their staunch male culture lives on today in beer commercials exploiting “the misogynist rascal humour of the Kiwi bloke and the rural over the urban”.

Finding such useful analysis in the rough of Falconer’s 500-page footnoted endeavour requires stamina. If the narrative drags in places in its attempt to balance factual detail and insight, there are plenty of distractions. The accompanying imagery is sometimes mystifying and captions such as “Land Stabilisation measures, Sumner Beach, Christchurch, 2012” and “A home in Christchurch” leave one none the wiser.

There is some terrific unearthing from the Turnbull Library and other collections — such as the 1907 proposed Waitemata-Manukau Canal (what might have been) and the 1960 “Harbour Skyway” proposed in 1960 for Auckland’s Quay St (lucky escape).

There are structural oddities — jarring cross headings, some chapters ending with a “Conclusion” and some not. But some chapters — notably “Palisades and Picket Fences” — deliver rich insight. The last chapters, while critical of present-day Christchurch and Auckland, leave you wishing Falconer, informed by his detailed historical research, had turned up the heat to blistering.

The general thesis appears to be that urban design has for centuries been pretty crap and that innovation in urban matters is reserved for “the traditional pillars of New Zealand identity”: the environment, agriculture and sport. Had our Resource Management Act protected “our architectural and urban patrimony” as well as our ecological inheritance, laments Falconer, we might have had a living urban tradition to draw upon.

Optimistically, he believes that in the past decade or so urban design’s time has come. He may be right. But judging by the hash we’re still capable of making in both Auckland and Christchurch, it would seem our urban design history is destined to repeat, sometimes as farce.