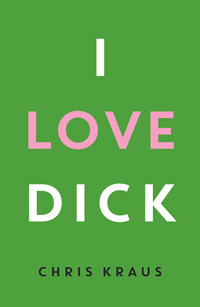 Let’s be clear from the start, I Love Dick is not a novel in the true sense.  Semi-fictional memoir, perhaps, rambling discourse on post-modern French aesthetic theory, certainly; anti-romance, pre-divorce road-trip.

Most of all it’s a piece of performance art, into which the reader is unwittingly drawn as one of the protagonists. That’s especially so if, like me, you read in cafes. Sipping my flat white and holding up the lime-green volume to public view, with its large font title, I begin to note raised eyebrows, sniggers, joking asides, and then a rather camp gentleman brushes past me and mutters: “Do you, indeed?” Without a doubt, this is part of the author’s intention, although it’s also probable her ideal reader is female.

Chris Kraus’s narrative, in familiar post-modern style, concerns a character also called Chris Kraus and her husband, Sylvère, who may well be Kraus’s real ex-husband, the French philosopher Sylvère Lotringer. They spend an evening with the eponymous Dick, a British cultural theorist specialising in punk style, who inadvertently ignites in Chris an obsessive and clearly sexual desire.

The largely cerebral nature of Chris’s marriage permits her not only to share with Sylvère her sudden passion, but to co-opt him into writing a series of faxes to Dick (this is 1994, and pre-email) that declare her feelings. The faxes remain unsent (at least for a while); and might it be that the couple’s shared fantasies about, um, Dick reflect what is missing from their marriage?

So far, so Freudian — well, not so much Freud as Deleuze, Althusser, Bataille, Weil and Foucault, all of whom get an airing, along with a who’s who of 20th-century French savants of the kind who write impenetrable chin-stroking prose and end their lives in mental institutions. The couple and their friends seem so well versed in this literature that all conversation turns into a kind of referential ping-pong. One can feel a little left out, despite the frisson of finding some Kiwi connections (Kraus lived and studied in Wellington).

There’s relief in some surprisingly lyrical passages as Chris traverses America, projecting onto the landscape the emotive colourings of her collapsing marriage and urge to mate body-and-mind with Dick, who has morphed into a more general fetish of female desire. Kraus is a master of the memorable little ironic aside. But the overall effect is of a conceptual echo-chamber; an academic bouncy castle; and, finally — unless you’re well versed in the métier — a cul-de-sac. Perhaps, as the brutish simplicity of the title indicates, we need to unlearn some of our verbal sophistry before we can say something honest about gender and desire.