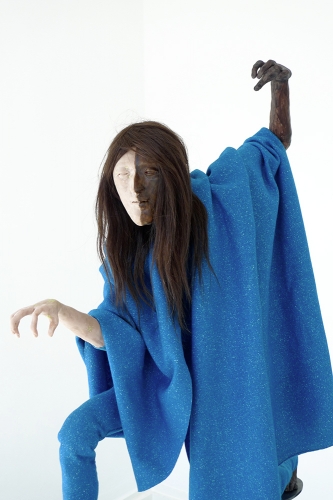 Minister of the Arts Chris Finlayson is on record stating his fondness for the bold, exuberant canvases of painter Piera McArthur so it’s no wonder he made it to the opening of her show at Parnell’s Artis Gallery recently. While McArthur doesn’t appear to be in good form on canvas in this outing,  if the minister was on top of his portfolio he would have known that across town, there were two other gallery shows opening with two artists, Francis Upritchard and Hany Armanious who are hot in the contemporary art world right now. I knew where I’d rather be.

Frieze magazine calls him an “artist’s artist” and patrons at the Australian opening party at the Venice Biennale in 2011 called him “different and interesting” – for many people Hany Armanious is baffling. Just why would you painstakingly cast all the objects you exhibit from an original?  Why not take a leaf out of Dan Arps’ book and just use the mass-produced bits and bobs that you’ve scavenged, in their original state?

I guess Armanious does it because he loves objects and he loves making and he wants to say something about one-off , hand-made things versus the avalanche of throw away kitsch candy that swamps us on a daily basis. Aucklanders are lucky enough to be able to make up their own minds because a show of his latest work (yes he even makes the plinths the objects sit on) is on at the moment at Michael Lett Gallery.

Armanious and New Zealand seem to get along. Before he hit the big time in Oz and now London, he was Elam’s artist in residence and had a solo show at Artspace and was shown at City Gallery in Wellington. Chartwell added him to their collection yonks ago – recognising his kooky, cult aesthetic as a thing of value.

The patrons I spoke to at the Australian party in Venice weren’t over the moon about the spare collection of detritus that Armanious was showing in their pavilion, but they support Oz at Venice, period, so they are prepared to put up and shut up (and anyway Simrin Gill appearing for them at this year’s outing will settle down those ruffled feathers a bit no doubt).

Back at Lett’s gallery, the carefully crafted cardboard plinths contain an eclectic collection of beautiful and banal everyday things –some under wonky plastic bell jars. They are weird and arresting too in their loving madeness, just don’t try to read too much into it all. Instead enjoy the aesthetic of the industrial space, which is the perfect setting for his work.

Armanious is not the only artist in town with Venice cred. Along the road at Ivan Anthony, Francis Upritchard (who represented NZ at the 2009 Biennale with Judy Millar) has upped her game significantly with a great show that deserves all the attention it’s receiving. The assured figures she shows are new, but ancient too with their head wraps, guru-type poses and harlequin-painted skin.  They are by far the best part of the show, which also features coconut-ice coloured bowls and some Peter Maddenesque collages.  The drapery on these larger, confident figures is colourful and energetic too. They reminded me of an updated Degas ballerina. The work reflects the artist before us: Gone is the petulant girl who was so irritated by the attention her Walters Award-winning exhibition received in 2006.  Upritchard is a confident international artist these days. She has just signed with uber dealer Anton Kerns in New York, has a show in Japan later this year and is pushing her practice along nicely. I’m guessing her great strides have a lot to do with ‘being there’. The tyranny for so many NZ artists is distance and basing herself in London since the late ‘90s has proved a wise move for Upritchard.

With so many commitments on the other side of the world, we are lucky to have this new work right here, right now, so catch it while you can. It’s nicely priced for our institutional collections too, hint, hint AAG and Te Papa.