The art that's right underneath your nose on Auckland's waterfront

There's a wealth of history and artwork hidden in plain sight around Auckland's waterfront - but be honest, how often do you stop to look at it? 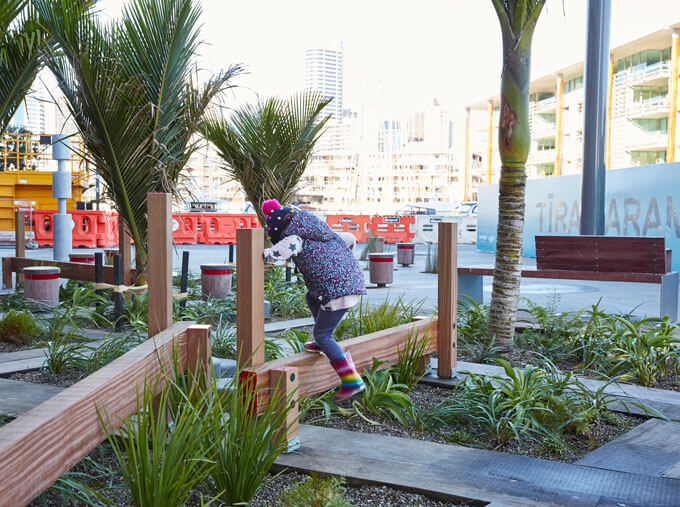 There’s a wealth of history and artwork hidden in plain sight around Auckland’s waterfront – but be honest, how often do you stop to look at it? Catherine Smith dug out her history books to get a sense of old Auckland.

Hundreds of thousands of dots sandblasted into the concrete represent the shellfish and seafood that were so important to Maori (shells were unearthed during construction) while arrow-shaped “purposeful puddles” are filled and empty with the tides.

The landscaped nikau gardens include stepping stones and wharf piles that suggest the activity on the waterfront 160 years ago.

“There were pa sites all around here. Shelly Beach [Oka, now around Point Erin Park] was particularly important for its seafood, which I acknowledged in another work at Victoria Park when the tunnel went in in 2011/12,” she says.

Reihana collaborated with Henriata Nicholas, as Kupenga Design, to tell the stories of the area in the sandblasted glass design around the Jacobs Ladder footbridge to Westhaven, the Te To retaining wall walkway beside the motorway that uses flax patterns and palisade fences and a whakatauki (proverb) that honours the importance of the Waitemata Harbour and Hauraki Gulf as fishing grounds. 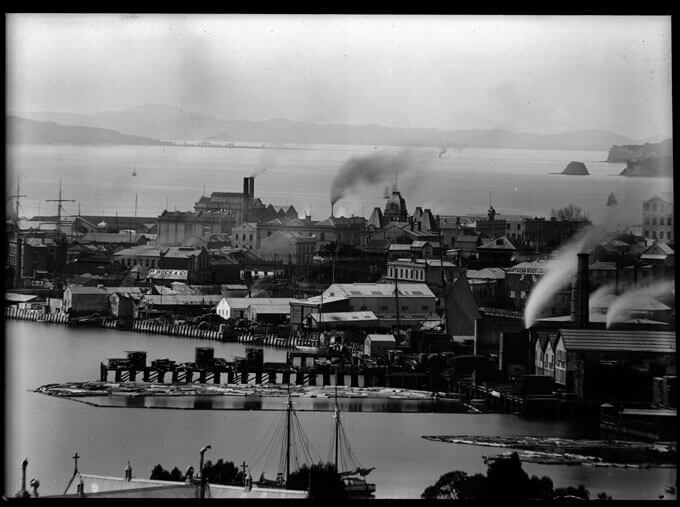 Other pa on the city waterfront included Te Tou at Point Fisher (now the name of a lane in Beaumont Quarter), Te Ngahuwera, near today’s Customshouse and Te Rerenga-oraiti on Point Britomart (carved away by Governor William Hobson to fill in the land to extend the waterfront for European shipping).

But look closer: all through the city, there are other artworks that acknowledge the original shoreline and the stream, Waihoritiu that flowed down Queen Street to Horitui Bay.

The stream was covered over and the bay’s name changed to Commercial Bay. But at the top of the city, a haiku by Hone Tuwhare engraved in the border of the splash pad in Myers Park (about 60 metres north of the kindergarten) is dedicated to the original stream. 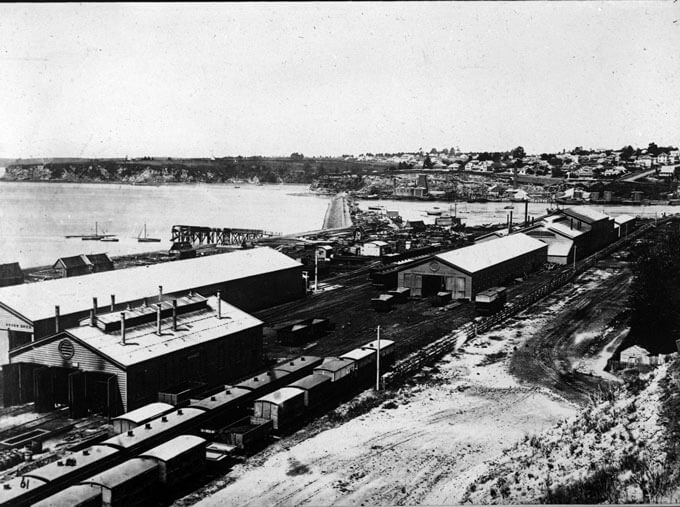 Anchored at the bottom of the city

At the bottom of the city, the boulders and pot jet fountains at Britomart’s Takutai Square by Chaz Doherty and artists from Ngati Whatua reference the pipi beds of the Te Rou Kai (the food basket) nearby, Takutai refers to the sea and tides. Look for the tiny stainless steel shells embedded in the paving.

Further up Queen Street (on the corner of Shortland Street) is Fred Graham’s Kaitiaki II, a stylised anchor that signifies the importance of the site as a resting place for the Ngati Paoa war canoes.

It partners with his Te Waka Taumata o Horitiu on the corner of Swanson Street that features a large stern and prow posts of the ancestor canoes on this former beach.

Further east, on the northern side of Beach Road (between Britomart and Tangihua Street) Chris Bailey’s Tauranga Waka’s five bronze sculptures represent the five waka from different iwi, lined up on the foreshore.

The waka look like they’re emerging from the footpath, it’s easy to imagine them being hauled up upon the original beach from which the road draws its name. 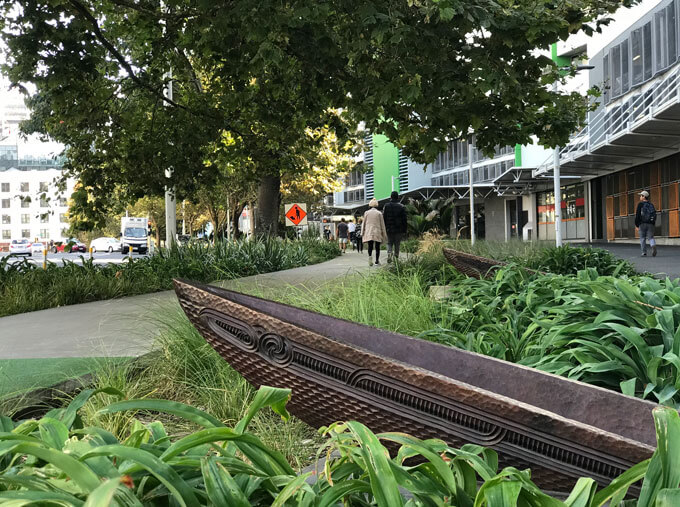 Buildings are not exempt – look inside the lobby of PWC Tower for Bill Culbert’s Wall Wave.

The two illuminated neon tubes crossing the ceiling mark the alignment of the old sea wall, while the line of basalt paving across the lobby floor records the location of the seawall, the edge of the reclamation and entrance to the dock that existed between 1878 and 1915.

Precinct Properties, the developers of Commercial Bay are planning further markers of the original waterfront in the new building and landscaping.