Jacqueline Fahey let Rebecca Wadey take a fascinating peek into her wardrobe, and personal history, for our My Life in Clothes feature in Metro’s June 2013 issue. 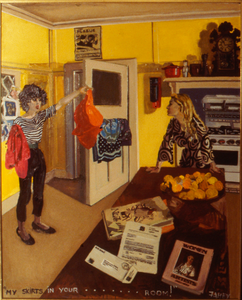 “I see clothes as political,” says the 83-year-old artist. “As a statement of subversive thinking.” Which is one of the reasons she once called a painting, My Skirt’s in Your Fucking Room (left). 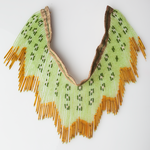 This was off the bottom of one of those skirts from the 1920s; my mother got it in Melbourne. She went to the Melbourne conservatoire on a scholarship and lived in Australia for about 10 years. She didn’t marry until she was 30 — I think she saw no call to marry. It’s a very feminist issue, isn’t it, having children? The skirt had mostly disintegrated so I cut off the bottom. It looks lovely as a necklace. I wear it with earrings I got in a junk shop years ago. everything is years ago now! 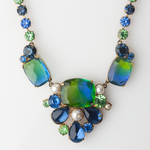 I love accessories. I think they’re a great distraction. This was bought for me by my husband [psychiatrist Fraser McDonald] as an engagement present. An exhibition of Dior replicas had been shown in Wellington. I’d seen it and said, “I’d love to have that,” and he said, “Well, you can have it instead of an engagement ring!” So I did, for a while. Then my aunt gave me an engagement ring of hers. She had never married but she’d been engaged twice. They were lovely diamonds. It’s [daughter] Alex’s engagement ring now. I don’t wear rings because of painting. The necklace also came with some lovely earrings and a brooch but they were worn by my daughters — borrowed, jumped on, worn to drunken parties, gone forever!

Back in the 80s, we lived at Carrington Hospital, in that long big house at the front. There was a Czechoslovakian woman who had a junk shop right on the corner of Carrington Rd and Great north Rd. I used to go and talk to her and we’d look around her stuff, and now and then I’d buy something. Then she was forced out by Rogernomics and had to sell up. She had a huge bag of this sort of thing, that Polynesians had brought in as security at different times. This is one of the ones I really liked.

I got these from the museum in Wellington, Te Papa. Actually, I went in to see if they were selling my first book, Something for the Birds, and they didn’t have it. I said, “You’ve got three of my paintings here and you’ve not even got my book on the bookshelves. I think that’s disgraceful!” I still bought the earrings — that was a necessary performance, if you know what I mean. 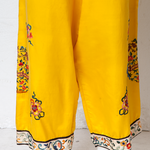 Augusta [eldest daughter] got these trousers when she was at drama school many years ago, about 1980. She was in one of the early years at drama school, the real one in Wellington, started by all those old actors. She found them in a transvestite shop. They were beautifully wrapped, had never been worn, they were meant to have come from an old woman’s house who had died and were 100 years old, back then! They’re polished silk, from China, and they’re beautifully done. There was a gorgeous top that went with them. But of course it was stolen by my daughters. They wrecked it. At your own peril! Alex was a great one for breaking jewellery, or even readjusting it for reasons of her own. Augusta was more of a clothes wrecker. When she went flatting, she must’ve had the worst washing machine in the world; you’d say to her, “Don’t wash it! Don’t wash it!” We all shared — I had no choice in the matter. Talk about me saying, “My skirt’s in your fucking room”, I didn’t get a look in! These pants were too short for them — they’re all quite a bit taller than me. That’s why they’ve survived. And why I’m still wearing them now.

I bought this in Ponsonby Rd about 15 years ago; it was rather expensive. Soon after, I wore it to an opening in Parnell, and when I was leaving I saw this big burly chap, very good looking, pushing a little girl in a pram and he called out to me, “Hey, hey! You wear mine, mine! From Afghanistan! I make, I make, I make.” And he insisted I go around to his house and meet his wife. And he said they were things he brought from Afghanistan with him. Isn’t it funny! So it’s the genuine article. 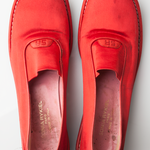 They’re in amazing condition, they’re about 20 years old. I only wear them for occasions, you see — that’s costume dress-up.

Liz Ellis gave me this about 20 years ago. Her husband, Bob [Robert] Ellis was the professor of painting when I worked with him at the university. Liz is a sort of paramount Maori up north, and she and I tried to help with bringing more Maori to the art school, not just as a token geesture but so they could have the same experiences Pakeha had. And she gave me this afterwards. It’s from the new Hebrides. 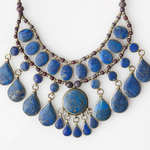 Augusta sent me this from Atlanta, where she lives with her family. You know, a lot of the young American soldiers come from around Atlanta. It’s where they get a lot of the poor boys who go over and fight in the army in Afghanistan — this is plain loot. The soldiers bring it back and sell it in their home town. It’s apparently very good lapis lazuli.